When the Department of Environmental Quality first asked the City of Hagerman, ID to present on their recently completed wastewater land application project, City staff wanted to say “No!”. But instead, Justin Hulme, the public works superintendent, called J-U-B to see what could be done. Soon Dan Ayers (Boise Office) was part of the team preparing for the presentation.

The City of Hagerman’s land application project story started with an old lagoon system that discharged into the Snake River. After Total Maximum Daily Limits (TMDLs) changed with the new 2007 NPDES permit, the system was in noncompliance, and fixes needed to happen.

The City and J-U-B worked on finding solutions for the system and frequently collaborated with DEQ, who became an essential partner in the process. Rapid Infiltration appeared to be the most economical solution, but none of the areas near the City’s
lagoons worked geologically. Evaporative basins had economic, land use, and stakeholder problems. The City then decided to go with a land application, and after many visits, a local farmer agreed to sell nearly 100-acres of farmland adjacent to the lagoons – the land had not been for sale. But it still took almost a year of outreach and explanations to help an adjacent organic farmer and exclusive Hunt Club facility understand that the land application of the wastewater could be done responsibly and safely. Now that the project is complete, the City can beneficially land apply their treated wastewater instead of discharging to the river, and they are in compliance with their NPDES permit limits.

Justin and Dan presented the Hagerman story in a nationwide webinar hosted by the Pacific Northwest Water Reuse Association on July 31, 2020. They did a great job, and it was an honor to “Help Each Other Create Better Communities” by helping our client tell their story. 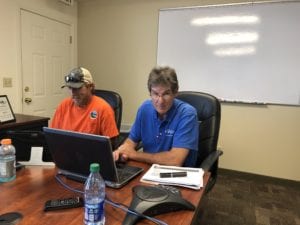