A statue honoring John Hayes, a pioneering surveyor, was unveiled on July 6, 2018, at a dedication event for the sculpture at the new Twin Falls Commons. The story of John Hayes is about the transformation of a region through cooperative efforts and exemplary feats of land surveying using the relatively primitive instruments of that era. Read more about John Hayes and the story behind the statue in the History-Art-Community section of the xyHt Magazine.

Dave LaMure, the sculptor of the John Hayes statue named “A Vision of    Tomorrow,” consulted with J-U-B’s own Tom Ruby and Bert Nowak to make sure the details of the surveying equipment of that era were correct.

Using the Future to Preserve the Past

ONE MONTH AFTER THE DEDICATION, a local team of surveyors used high-tech surveying equipment of the present day to capture the site in as a high-resolution 3D model for preservation purposes. The model was presented to the City of Twin Falls not only so they could feature it in any future 3D virtual or augmented reality tour or educational applications, but also as a high-deﬁnition as-built of the original should there ever be a need for repair or replacement years, or even centuries from now.

For retraceable orientation, the team used a high-precision GNSS Trimble R10 rover and real-time network kinematics (NRTK). A   robotic scanning and imaging total station were then used to scan and map the site.

This scanning total station, their Trimble SX10 (read xyHt’s recent feature on these types of instruments at https://goo.gl/PTEcqT), seems like science ﬁction in contrast to the instruments of Hayes’ era. Ruby also brought an antique from that era, an 1880 Gurley surveyor’s transit, nearly identical to that featured in the sculpture—some of surveying’s past meeting its future. 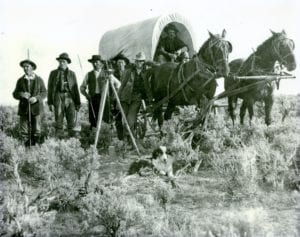 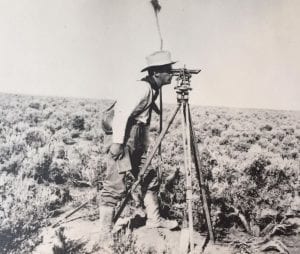 The iconic photo of Hayes, on the first day of the survey laying out the City of Twin Falls in 1904, appeared on the cover of a book a century later, inspiring the community and artist Dave LaMure Jr. (Photo courtesy of the Hayes Family.) 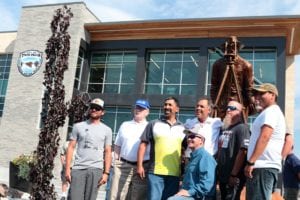 The artist posing with local surveyors at the dedication