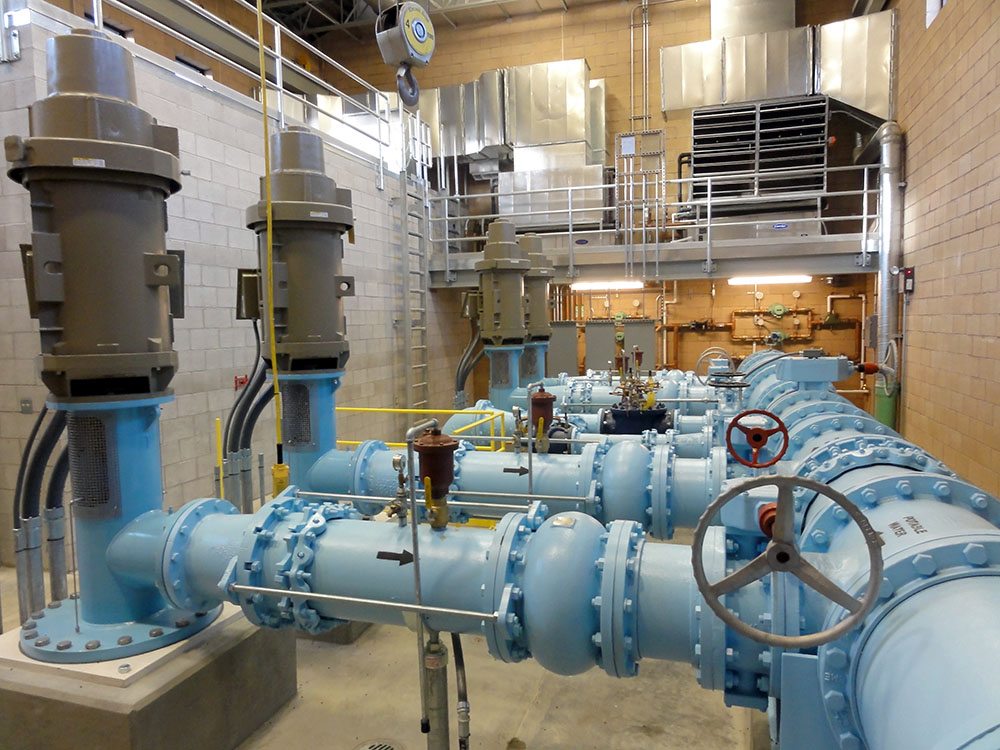 The Issues.  Several of the City’s supply wells produce water with arsenic concentrations higher than the drinking water standard set by EPA. As result, the City entered into a compliance agreement with IDEQ to meet the arsenic standard by January 2012. Furthermore, the City recently experienced significant industrial growth in the community that strained their existing water storage, pumping and distribution systems. They were also experiencing seasonal and long-term declines and fluctuations in their groundwater supplies.

Addressing the issues. Non-compliance with the arsenic standard, increasing demands, and uncertain sustainability of their supplies prompted the City to work with J-U-B to implement several water system improvements from 2010 through 2015. For arsenic compliance, the project included a 10,200 gpm pump station, 51,000 feet of 8- to 36-inch water mains, and blending facilities. To support industrial growth and bolster supplies, the various projects implemented 17,600 feet of 6- to 24-inch water transmission mains, two 125-hp pumps in an existing pump station, back-up generators, a 5 million gallon concrete storage tank, and replacement of the 23,500 gpm pumps at their primary source.

Results and Benefits. At their conclusion, the various water system improvements have allowed the City to consistently and reliably comply with the arsenic drinking water standard, while also bolstering supply capacity to meet demands in areas of the community in need of additional water to support growth.

“J-U-B ENGINEERS, Inc. (J-U-B) has worked with the City of Twin Falls for many years. During this time, we have found their services to be of excellent quality and value. We particularly appreciate the efforts of J-U-B’s staff that worked on the Water System Arsenic Compliance Improvements project.

The arsenic blending project was a complex undertaking that included a large booster pump station and over seven miles of 24-inch and 30-inch water transmission mains through mainly urban roadways. J-U-B provided preliminary and final design, bidding, and construction engineering services for the project. The project was particularly challenging due to extensive utility and agency coordination, difficult rock removal conditions, traffic control and disruptions to the public, tight schedules, and multiple bore crossings. The project was split into five smaller construction projects to allow local contractors an opportunity to compete for the work and to facilitate a tight project schedule. The City and J-U-B worked closely to successfully address these challenges and to implement a project that will benefit the City for many years.”